All floor coverings coming from the territory of present-day Iran are the embodiment of class and sublimity desired by connoisseurs, designers and admirers of never-passing elegance in equal measure.

In the previous part of this article I was describing the characteristic features of magnificent Persian Tabriz rugs and Persian Kashan rugs. Now it is time for no-less beautiful yet slightly different types of Persian weavings – Persian Qum rugs and Persian Heriz rugs. 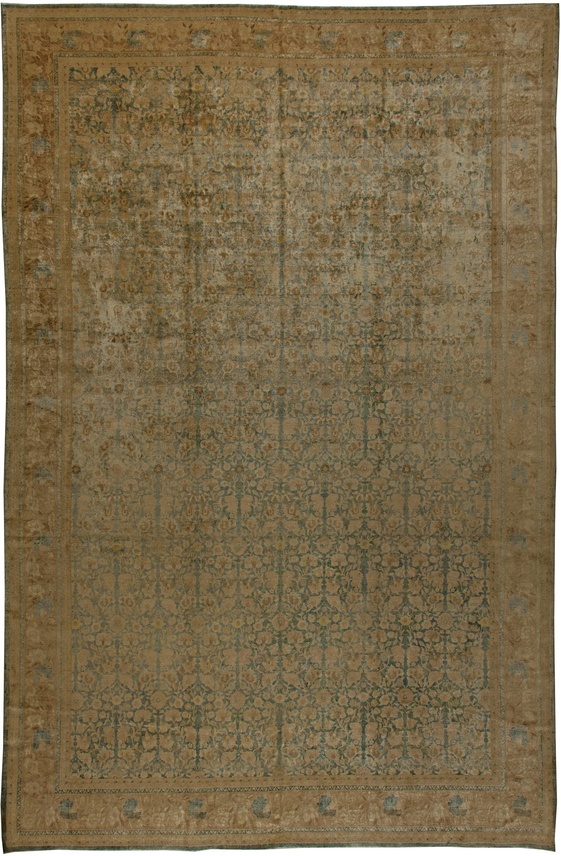 Persian Heriz rugs, also known as Serapi rugs or Bakshaish rugs, are renowned for their pronounced geometric style, impeccable making and saturated, vivacious color palettes. These mesmerizing textiles are regional cousins from northwest Persia, thus they share mutual origins. Persian Heriz rugs incorporate well-known configurations of splendid flower-head medallions, corner spandrels and multiple borders with angular vinery, stylized floral patterns and bold palmettes rendered in a distinct geometric fashion. All these details are distinguished by an incredibly appealing simplicity of line. Although Persian Heriz rugs originated in sophisticated workshops, they have a firm tribal quality to them. Both Heriz rugs, sometimes also known as Serapi rugs, and Bakshaish rugs may be found with all-over patterns and abstract interpretations of willow trees or ascending shield palmettes. These quite large, room-sized carpets are reminiscent of the small antique Kazak rugs made by the Caucasian villagers in the north. Durable and robustly constructed with large knots, Persian Heriz rugs may serve their owners for generations without any signs of blemish. Their rich colors range from jewel tones of cherry red, navy blue and saffron yellow, to pale terracotta, sea foam, powder blue and ivory. The secret ingredient of Persian Heriz rugs, which helps them achieve the astounding quality as well as the remarkable patina effect, is copper present in the rivers surrounding Heriz. Thanks to the fact that sheep herds drink the water with traces of copper, their wool is resilient and has a unique touch to it.

Although the majority of collectors are looking for rugs that are at least 100 years old and anything below that age is considered not so high-value, the case is different for Persian Qum rugs. Qum (also written as Qom) is not traditionally a center of rug production yet during the last century it has issued some of the greatest tapestries and floor coverings in the world which tempt with never-passing charm and ultimate sophistication. The category of Qum rugs has many names – it can be described as Qom rugs, Ghom rugs, or Ghum rugs. Their piles are not especially high, however, the knot density is absolutely impressive with the count reaching 400-860 knots per square inch. Such dense knotting allows craftsmen to create fabulously detailed and intricate designs. The variety of patterns of Persian Qum rugs is considerable as the weavers, when they started the production, already had access to the entire historical heritage of Persian rug craftsmanship. Medallions, botanical references, spandrels and classic Persian motifs, such as the tree of life or the weeping willow, are among the most frequently applied. Another reference to tradition in Persian Qum rugs is the color palette which very often incorporates the paramount Persian colors – blue, red and ivory. New but old, simple but complex – Persian Qum rugs are full of paradoxes which makes them one of the most intriguing of all Persian carpets.