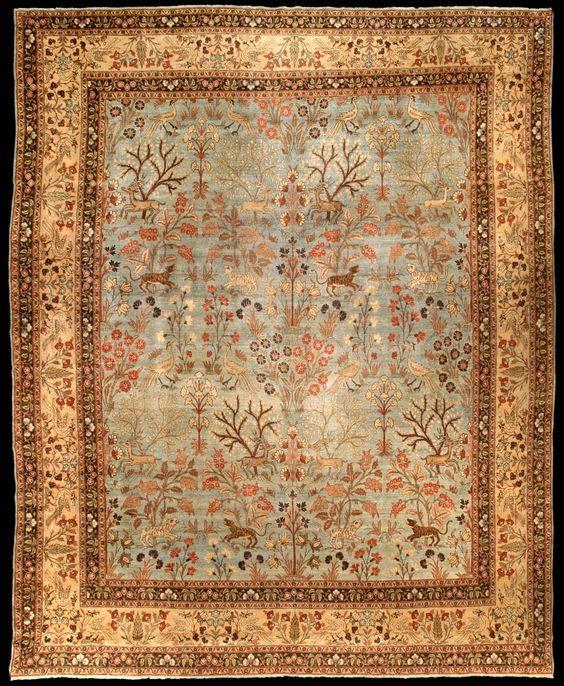 Tabriz rugs are absolutely crème de la crème of all carpets in the world. These Persian weaving wonders distinguish themselves by rich historical background and a profound tradition which comprises advanced techniques, the finest materials, sublime coloration and dazzling array of intricate motifs and patterns. In the town of their origin the craft of weaving was considered a priceless skill and its secrets were the most precious heirloom that one could pass on to the next generation. No wonder Tabriz Rugs are characterized by an immeasurable variety of designs which are a sort of a chronicle on the history of human culture, religion and civilization. There are sources that indicate the Tabriz rug’s record began in the 3rd century, during the Sassanid era. However, the peak of their artistry and refinement is dated between the 12th and 16th centuries, featuring some of the most extraordinary and celebrated rugs in the city’s rich history. 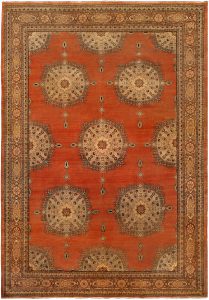 The most typical among these rugs are abstract or nature-drawn ornamental patterns, including Safavid emblems, allover Herati (fish) or spectacular medallions  with the background colors dominated by red, cream or navy blue which prevailed in the majority of Persian creations. However, Tabriz subject rugs are saturated with art and poetry like no others. Many of the pieces from the Tabriz rug’s early period can be grouped under the common name “Lachak turanj”, which featured patterned borders representing the scales of a fish rising to the water’s surface in admiration of the Moon’s reflection. The masterly executed piles very often consisted of even more elaborate and metaphorical topics as they were inspired by the works of the greatest Oriental poets, such as Ferdosi, Nizami and Fizuli, or even the ancient book covers. 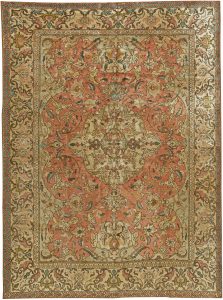 One of the oldest subject carpets was the Sasanid rug named “Zimistan”, which in English means “Winter”. Contrary to its name, the carpet is said to depict fresh and vibrant spring landscapes. The name “Winter” took hold because the rug was laid in the palace during every wintertime to the pleasure of the Sasanid King, Khosrov Parviz, so that its vibrant patterns could brighten up the gloomy interior with the thriving colors of the lush gardens and fields in bloom. After the devastation of the Sasanid empire, it was taken by the Arabs as a trophy.

Tabriz rugs amaze with the quality of execution but totally stun with the meticulousness of design. Khosrau, Farhad, Shirin, Bahrām Gōr, Iskander, Layla and Majnun – these characters created by Ferdosi, Nizami and Fizuli, along with the incredibly intricate miniature paintings, the four seasons, the famous Oriental buildings, including forts, palaces, mosques, temples, the trees of life, the love and the glory – all these you may find within the thoroughly crafted borders of majestic Tabriz rugs.