There are many good weaving schools and really fine carpets that made a mark in the history of human culture. Nevertheless, it is commonly believed the territory of present day Iran which used to be the mighty Persian empire is the cradle of rug production and the source of the finest carpets on Earth. Given the rich and profound heritage of Persian carpets, it can be safely assumed that this view is justified. All the more, the antique Iranian town of Tabriz has brought us two rugs that nowadays are considered the most exquisite ones that have ever existed. They are called Sheikh-Safi or simply Ardabil Carpets after the school that has initiated their creation.

Although Ardabil is a separate town, its weaving school is subordinate to the one from Tabriz and most probably Tabriz was the place where two mysterious wonders were completed in the mid-16th century, during the rule of the Safavid Shah Tahmasp I. The history of twin rugs is a dramatic one as one had to be sacrificed in order to save the other. Initially, the pieces were located in a mosque in Ardabil which also comprises the mausoleum of Sheikh Safi, hence the other name for Ardabil Carpets. However, after years of service they became heavily worn-out and were sold to a British carpet broker in 1890. He was determined to bring back their former glamor but he could not save two so he decided to restore one of the carpets using the other. Then, he resold the once again beautiful rug to the Victoria and Albert Museum in London. The second “secret” carpet, smaller, now borderless and with some of the field missing, and made up from the remaining usable sections, was exchanged by wealthy buyers for years. Eventually revealed and shown in 1931 at an exhibition in London, it was spotted by American industrialist J. Paul Getty, who bought it from Lord Duveen for approximately $70,000 several years later. The interest in the “defective” object was so immense that Getty was even approached by agents on behalf of King Farouk of Egypt who offered $250,000 so that it could be given as a wedding present. Finally, Getty donated the carpet to the Los Angeles County Museum of Science, History, and Art in the Exposition Park in Los Angeles where it is kept until this day. Other fragments have appeared on the market from time to time.

The famous Tabriz rugs have a masterly executed silk foundation with wool pile of a knot density at 300-500 knots per square inch (47-54 knots per cm2). Considering that the London carpet is 34 1⁄2 by 17 1⁄2 feet (10.5 m × 5.3 m), it gives about 26 million knots in total. Interestingly, the Los Angeles rug is distinguished by a higher knot density, probably because in spite of deterioration it has remained more genuine. Both carpets have an inscription: a couplet from a ghazal by Persian mythic poet Hafiz Shirazi and a signature. This inscription reads:

“I have no refuge in the world other than thy threshold.

There is no protection for my head other than this door.

The work of the servant of the threshold Maqsud of Kashan in the year 946.”

Translating this date into the Christian calendar shows that the carpet was woven around the years 1539–40 during the reign of Shah Tahmasp, one of the great patrons of carpet weaving. 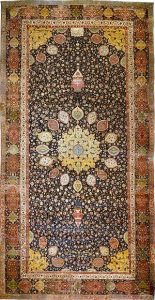